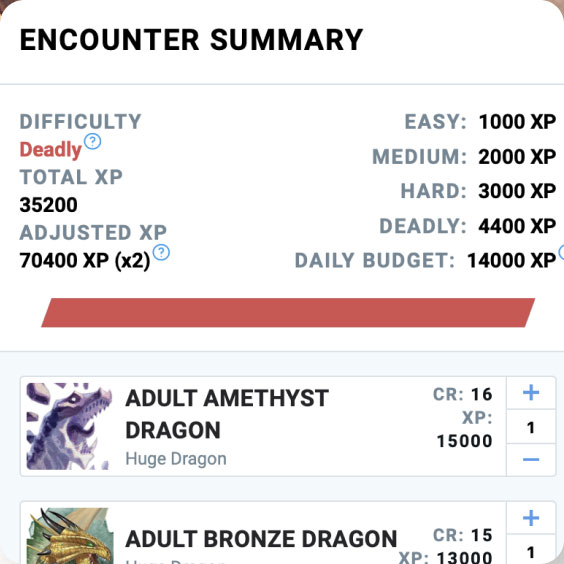 If you’re playing 5e D&D, you may be looking to get a piece of software to help you track your battles and adventures. There are many options available to you, such as the D&D Combat Tracker and Encounter Builder. These software programs are used to track the outcomes of a character’s actions, such as attacks and spells. This can be a great way to make sure you’re not going to run into trouble while battling your opponents.

D&D Beyond is a web-based platform that makes it easy to create and store encounters, and to keep track of character stats, health, and spells. The platform also provides tools for DMs to easily build NPCs and manage campaigns. It also offers a variety of tools that allow users to purchase and use homebrew content.

The D&D Beyond encounter builder is a great way to simplify the process of planning an encounter. By entering the number of players in your party, your difficulty level, and the name of the encounter, you’ll get a list of recommended combat encounters for your group.

In addition, you’ll have the option to add homebrew monsters. You can search for baddies, save them for later use, and edit them. If you’re a DM, you can also search for saved encounters.

One cool feature of the D&DBeyond encounter builder is the dice rolling feature. When you click a number, D&D Beyond will combine the roll with a modifier to determine the total.

Another great feature of the D&DBeyond Encounter Builder is that you can search for saved encounters. If you’ve lost your bookmarks, you can easily re-open them in the future.

Despite the fact that you can build and store encounters with the D&DBeyond Encounter builder, there are a few things that you should keep in mind. First, you should only include key features in your build. Second, you should be able to export your encounters to a text file.

Finally, you should be able to share your encounters with other players. If you want to do this, you should upgrade to the Master or Hero tier. This tier will cost you money, but it will provide access to more features, such as an interactive overlay on Twitch.

As with any product, D&DBeyond encounter builder will change over time. This is especially true of its dice rolling feature, which recently added a new cool feature.

D&D Combat Tracker is a handy piece of software that lets you create and track combat rounds in 5e. It also keeps track of character stats such as HP and Initiative.

The app’s UI changes depending on the current status of an encounter. For example, if the combat is underway, the main screen will show combatants and their turns. There are other sidebar tabs that let you add monsters, look up characters, save encounters, and so on.

The App is free to use. Users can save up to eight encounters, but if you subscribe, you can save as many as you want. One downside is the fact that you have to be logged in to D&D Beyond to use it. You can do the same thing with a text editor such as Google Docs.

As for the features of the app, it’s definitely not the most comprehensive system on the market. That said, the tools are designed to work with other content on the site. This includes official artwork and tooltips. But the site doesn’t allow you to download any additional media.

While it may not be as polished as some of the competition, D&D Combat Tracker has some very useful features. With the ability to roll initiative for multiple characters, track combat rounds, and more, the app can make running an encounter a breeze.

Another great feature is the option to import characters from a campaign. Whether you are starting a new campaign or using existing ones, the app allows you to easily import a character’s hit points, level, and other relevant details.

One of the best features of this app is the ability to roll initiative for your own character. Unlike some other tracking systems, you can do this in real time.

D&D Combat Tracker is a great way to get started with a 5e campaign. However, the price tag isn’t worth it if you don’t have the time to devote to learning the system. Plus, some of the basic features are missing in the app.

Combat is a very important part of the D&D experience. The combat tracker is a handy tool, but it is not the only way to do it. A combat tracker will keep track of the number of turns in an encounter. It will also show you the characters’ stats, such as their HP and initiative. You can also use the combat tracker to roll dice on the fly.

One of the simplest ways to do this is by using a free service called Encounters. This app allows you to create a fight scene in less than two minutes, including all the details you need to know. In addition to its features, it has a built-in combat tracker, which is a cool gimmick in itself.

If you’re looking for something even more useful, Dice has updated its Encounter Builder. This program will let you quickly create an encounter, and it automatically calculates the xp budget. Using the program, you’ll be able to search for creatures by challenge rating, level, and other features.

Another cool feature is the Improved Initiative. This program allows you to tweak PHB content, and to apply damage directly to a creature. By doing so, you’ll be able to improve your game.

Lastly, the combat tracker is a bit more complicated. But it still has some features that you’ll be glad to have in your arsenal. While the program’s main purpose is to help you manage and track your characters’ stats, it also gives you the tools you need to run a successful battle.

In fact, you can even create an adventure using this program. The first step is to add a map, monsters, and details. Once you have the components of your adventure in place, you’re ready to develop your storyline. Using the adventure template will give you a good start.

However, if you’re looking to get the most out of your games, consider integrating a combat tracker into your session. With the help of the aforementioned features, you’ll be ready to take on the swarms of enemies and swarm of dragons.

If you are a D&D DM, you have probably heard of the RPGBot encounter builder. Using it, you can create a wide variety of encounters to play with your players. This tool is easy to use, and it is available for free to registered users.

One of the main features of the tool is that you can save your encounters for future use. You can also search through them or even filter by type. In addition to that, the tool also includes a combat tracker that keeps track of your character’s stats and initiative in real time.

Another feature of the tool is the ability to change the difficulty of the fight. This allows your players to adjust the difficulty on the fly. For example, if you want to increase the challenge level of the battle, you can add more hit dice for each monster, or you can reduce the number of monsters to make it easier.

The tool is available for various editions of D&D. The calculators are easy to use, and you can even save your tables digitally. While the math is not perfect, the tool can help you to get your encounters on the right track.

Aside from the ability to store and save encounters, the tool is also designed to allow you to create new ones. You can save up to 8 encounters for free, and you can also subscribe to the service and save more.

There are also tools that can help you to create and run a successful campaign. This includes a campaign manager, forums, and new players’ guides. To top it all off, the tool is built into the D&D Beyond website. That means you can access the best content for D&D right from your computer.

Using an encounter generator is not only useful for calculating the difficulty of an encounter, but it can also help you to plan out a successful session. By combining the different factors that go into an encounter, you can create a balanced and enjoyable experience for your players.