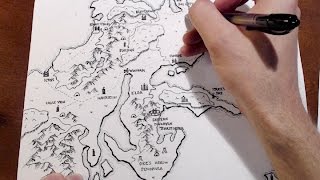 When it comes to building a Dnd world map, there are a lot of things to keep in mind. From the types of cities you will build to the types of settlements you will create, there are a lot of different things to consider when it comes to making your map feel right. This article will take you through a number of steps you can take to ensure that your map is set up the way you want it.

To make a world map with DND, there are a few steps you need to take. One of the most important is creating a world index. The index is a collection of bullet points associated with each place listed in the map. It acts as a guide to help you navigate the map in the most efficient way possible.

First, you need to figure out what to include. You can include a map of the country, a list of the cities, a brief history of the nation, and the locations of important sites like government buildings and military bases. These things are not as important as the actual map itself, but they will give your map some character.

Finally, you need to choose a font. Use a good old-fashioned serif font, though it is probably best to avoid italics. You should also consider the size and font colors. It is not a bad idea to include a bit of flair, in the form of an outline or a border, to draw attention to your work.

If you are planning to run a fantasy roleplaying game, you may want to consider adding settlements and cities to your DND world map. Settlements can offer a way to bring back NPCs from previous adventures, and can give players a chance to connect with their own backstories and the histories of notable organizations in their community. It can also help players build a relationship with important individuals in their party’s career.

When considering a location for a settlement, think about the needs of the group. For example, a group may need to travel to a town mid-adventure for resupply. However, if you decide to use settlements, it is important to make sure that your settlement provides enough resources for players to keep their minds occupied while they are away from their home. Some of these resources can include research facilities, information, rest and repast, and other leisure activities.

Another good place to settle is along a trade route. Roads and rivers allow for trade and provide opportunities to meet with local merchants. However, you should always be careful about providing a settlement with enough resources to keep it running, especially if it is located near natural resources. A settlement with limited access to these goods will need to find another source of supply through trade.

The best places for a settlement to be located are near rivers and seas. These areas will have natural resources such as water and wood, which can be used to build homes, as well as roads, which will help to facilitate trade. While larger cities should be built to accommodate a population of at least 25,000, smaller settlements can fit into a hex a mile wide.

You might think that you can’t include large bodies of water in a world map, but it’s not really the case. If you want to add a lake, river, or ocean to your world map, you can. But before you go ahead and do it, you might first want to consider some basic things. Specifically, you should take into account the size of the area you’re trying to cover. It’s also important to consider the layout of your landmasses. That way, you can decide which options to choose.

Rivers are one of the most important features to include in a world map. They begin in high altitudes and then travel downhill quickly. While they may not start out as rivers, they eventually join to form them. You can then add in marshes, swamps, and bogs to make your water more realistic. However, you should never add a river that goes uphill. This could lead to historical trauma and bring down your civilization.

A lake can also be very useful. It can be the reason why a continent is split into two, or it can fill up. Whether you choose to add a lake or a river, make sure it’s large enough to affect a significant portion of your map. Remember that a big lake can cause flooding or even an earthquake. So, it’s a good idea to build a larger map before you add a lake to your world map. Plus, it’s a great way to get the world’s geological history into the world’s aesthetic.

When building a world map for DND, it is important to make it feel right. A world map can be a powerful tool to help players visualize the story. By creating a map that is true to the game’s story and theme, you can keep your players engaged and make the map feel as if it has its own personality. To create a world map, start by determining the general shape of the landmasses. You can then choose different options to determine the layout and overall aesthetic of the map.

For example, you can decide to place cities near natural ports and trade routes. Usually, settlements form along these areas. They are also places where commercial fishing can be done. The same applies to mining. It makes sense to place these locations near the base of mountains, where resources can be mined. Also, you may want to include semi-plausible oddities that add to the aesthetic appeal of the world. These could be artificial irrigation canals that have created under/over paths for sacred streams. If you decide to include these, keep in mind that you must include rules for them.